Alright, so I’m sure you’ve seen the videos on YouTube of 1,000+ horsepower Toyota Supras. Maybe you’re planning on swapping to a JZ engine but don’t know which one to pick. Maybe you just want to learn more about the JZ engine family. Regardless of why you’re reading this, we’re going to dive into this topic in detail, and compare 1JZ vs 2JZ.

As you may have guessed, the 1JZ came before the 2JZ, and it came in a few different forms. Regardless of the engine dressings, it was always a 2.5L inline-6, with an 86mm bore and a 71.5mm stroke. We’re going to be talking about the 1JZ-GTE, which is the top of line twin turbo model of the 1JZ. 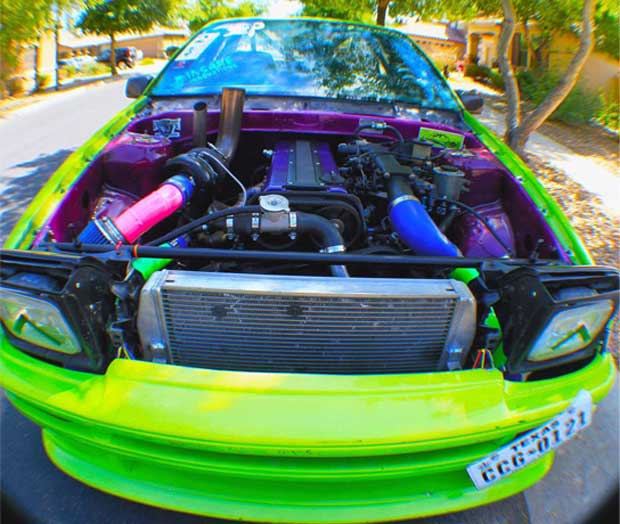 The biggest difference between the 7MGTE and the 1JZ that replaced it is the strength. The 7MGTE was a great engine, but it suffered from numerous cylinder head issues. The 1JZ is pretty similar to the 7MGTE, but with a cylinder head that actually stays on the engine.

The 2JZ shares most of the components from the 1JZ, the biggest difference in the displacement. The 2JZ retains the 86mm bore that the 1JZ has, but its stroke is increased from 71.5mm to 86mm. This makes the 2JZ a “square” engine, which means the bore and stroke are equal. This provides a better equal medium between low-end torque and high-end horsepower.

Check out: Ford Coyote vs Chevy LS, Which One is Better and Why? 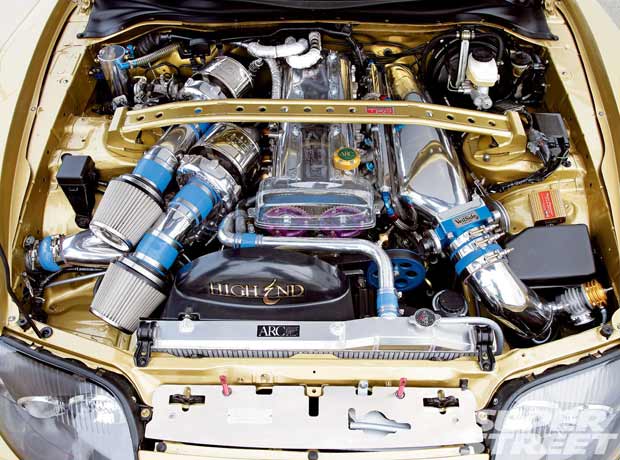 Unlike the 1JZ, the 2JZ-GTE came with a sequential turbo setup, meaning that the power band is much broader. One turbo gives low rpm power, the second turbo comes on at a later RPM to increase power in a very linear fashion.

So now that you have a little bit of knowledge about these two engines, let’s compare them stock vs. stock. Keep in mind, it’s nearly impossible to find completely stock, non-tuned dyno graphs for either of these engines.

Also Read: What Makes the Toyota MR2 so Special?

After hours of searching through forums, I found the most stock dyno graphs possible. Both use 91 octane, stock everything, and non-tuned. 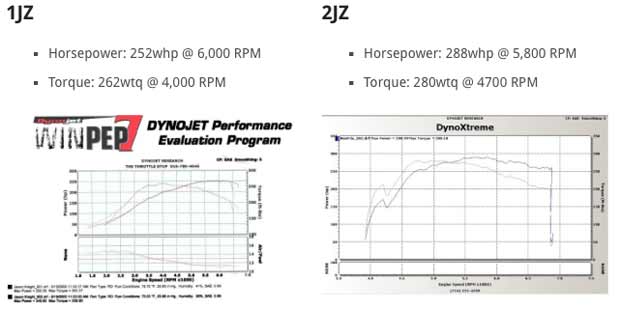 So you’ve seen the numbers, the 2JZ makes about 30 horsepower and 20 lb-ft more than the 1JZ. This shouldn’t be too much of a surprise to you, considering the 2JZ has an extra .5 liters of displacement. Numbers only show so much, the important thing is how it’s making those numbers.

Notice how the 1JZ dyno graph shows the horsepower continually going up. It’s a very linear gain throughout the power band. This is great for track use. The power is predictable when getting on and off of the throttle.

The 2JZ dyno graph the horsepower basically just goes up rapidly and then flattens out, but it’s not very linear. The power goes up early in the RPMs, flattens out, and then goes down in the high RPMs. This is great for street use because power is available when you need.

1JZ vs 2JZ: Modified vs. Modified

I can’t give you dyno graphs comparing 1JZ and 2JZ when modified because it’s impossible to find dyno graphs of each engine modified exactly the same. I can tell you that they respond to modifications nearly identically. The 2JZ, of course, will make a little bit more power and torque thanks to its extra displacement.

Check Out: Top 5 JDM Cars to Drive Before you Die 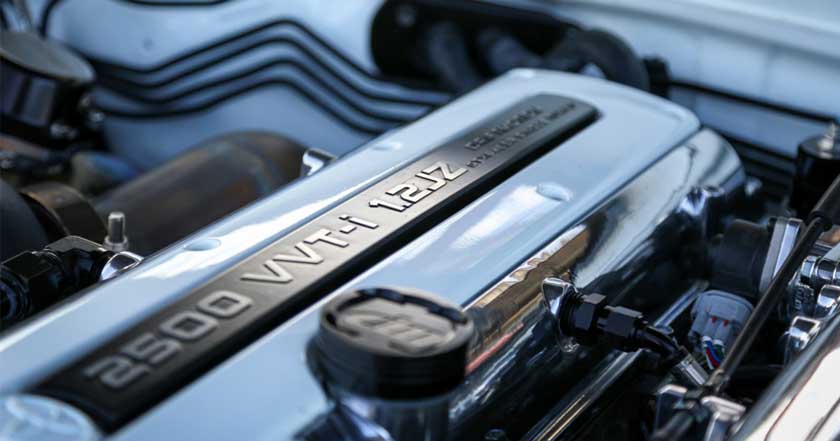 How to engine responds greatly depends on the size of the turbo. Generally speaking, a 2JZ making 500whp is going to respond better the throttle inputs than a 1JZ making similar power. This is once again a great attribute of the increased stroke of the 2JZ.

Parts are nearly identical in price as well. If you include the price of purchasing the engine itself, it’s actually cheaper to build a 1JZ. The most commons upgrades would be a single turbo setup. The factory turbos have issues when the boost is turned up at all.

The reason most people think that the 2JZ is stronger is that it can hold up to higher power levels. But, they fail to account for the extra displacement. Generally speaking the 1JZ stock bottom end is good for about 650-700 horsepower, and the stock 2JZ bottom end is good for about 800 horsepower. You would think that the 2JZ would be stronger than right? Wrong 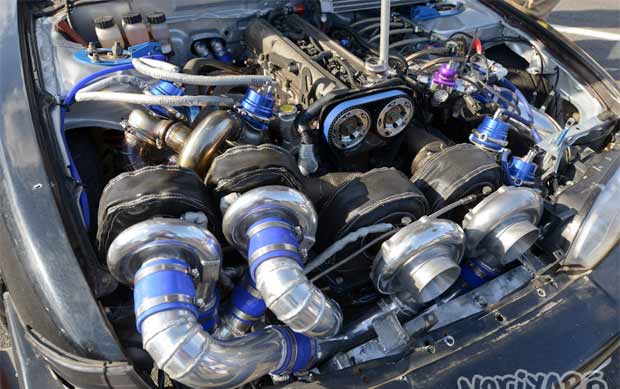 Both of these engine’s bottom ends have been pushed way past the numbers I’ve just quoted. But, the 1JZ and 2JZ can reliably push 266hp/liter on their bottom end.

Both are some of the strongest factory engines to ever come in a production automobile. Very few engines in the world can hold up to 1,000 horsepower or more.

I feel obligated to bring up the “cool” factor because I did the same in our RB26 vs 2JZ debate. Being cool and unique is something that can be underrated in the automotive world. In the example of RB26 vs 2JZ, the RB was cooler due to its rarity and arguably better exhaust sound. But, what about the 1JZ and the 2JZ?

Rarity is arguably the biggest part of the cool factor. For example, I love the Chevy LS for its performance, but it’s not that unique or cool anymore. In regards to rarity, the 1JZ is rarer here in the US. This is because we never actually got it in any of our cars.

The sound is also something fairly important to how cool these engines are. After all, if it sounds like crap then it’s not all that cool. In the case of the 1JZ and the 2JZ, they sound extremely similar. This is probably due to them being mostly the same. However, the 1JZs slightly higher redline seems to give it a bit more of a high pitched scream. Both engines sound awesome but I have to give this one to the 1JZ.

What Do the Experts Have to Say?

Well quite frankly, we are not extremely knowledgeable experts on the 1JZ vs 2JZ debate. So we went to the experts at Titan Motorsports and asked them which one is better, 1JZ or 2JZ? Heres what they had to say:

“We really don’t deal with the 1JZ, and there isn’t much of a debate that the 2JZ is superior in nearly every way from our standpoint.

A. We don’t take stock vs. stock into account because no one is going to leave our shop with a stock engine.

B. There’s no replacement for displacement.

C. I’ve yet to see an application where the 1JZ was superior in any way, which is 99% of the reason we never have them in our shop, although we do offer parts for those who have these engines. (Mainly early Lexus and MKIII Supra owners who did JDM swaps because of the ease of installation and low cost).

Given the choice between a 1JZ and a 2JZ with dollars not being a factor, I’ve never heard of anyone choosing the 1JZ over a 2JZ”

Good Read: 6 Reasons Why Chevy LS Engines are so Good

Keep in mind, Titan Motorsports holds the world record for the fastest “import”, which is a Supra with a 2JZ.

What Do Drifter have to Say?

Most high-level drifters run either a V8 engine or a JZ engine. So, I went to my friend Sean Ohlinger, who is a local drifter in Phoenix. He is also a part of a small, local car club called Within Minimum Spec. I asked him “Which do you prefer, 1JZ or 2JZ?” Here’s what he had to say:

“I personally prefer the 1JZ over the 2JZ, the 1JZ is way better for drifting on a budget. But, the 2JZ is way better if you’re willing to pay for it. The problem is, 1JZs are a little harder to find since we never got them in the states. There’s is really no logical reason that the 1JZ is better, other than price. That’s why so many people swap them into their car, because they’re so much cheaper.”

Also Read: What Makes the 240SX a Great Drift Car? 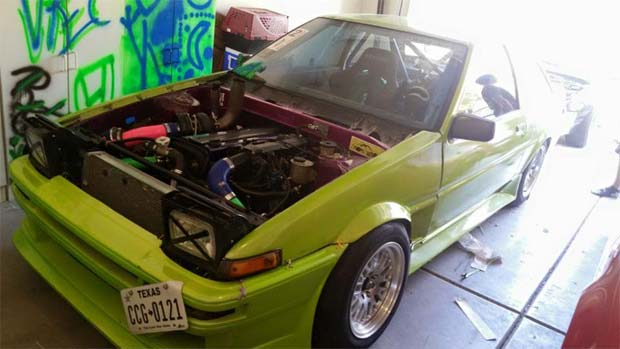 The 1JZ is better for slightly drifting, and especially when on a budget. The shorter stroke means it loves to hang out at high RPMs. It lacks low-end power, however, due to a short stroke and smaller displacement. It takes a fairly long time to spool up the turbo(s) because of its short stroke.

So, to answer the question 1JZ vs 2JZ which one is better? Since most of us build street cars, I would say the 2JZ is the better engine. But, if you’re on a tight budget then you’ll have to settle with the 1JZ.

If you liked this article on the 1JZ vs 2JZ debate, be sure to share it with your friends!