In the off-road community engine swaps can be a touchy subject. Most of the time torque is what you’re looking for as that’s what will allow you to turn big tires at low RPMs. Because of that, Chevrolet LS engines are pretty common, especially the truck version of the LS family. But, diesel engines, specifically the 4BT Cummins, are becoming increasingly popular. It’s not just off-roaders who are using this engine. It can also be found in everything from 240SX drift cars to Mustang drag cars.

Before I tell you everything you need to know about this engine, I must first inform you of the absolute the basics of the 4BT. You can find even more 4BT information on Wikipedia.

In the world of “light-duty” trucks, the 6BT Cummins, also known as the 12-valve Cummins, is legendary. The large size of the 6BT meant that it couldn’t fit in vehicles or equipment where there wasn’t a massive amount of space which is where the 4BT Cummins comes into play. The 4BT shares most of its components with the 6BT, but with two cylinders missing. The pistons, injectors, connecting rods, and valvetrain design are straight off of the 12v Cummins. Even though the 4BT is significantly shorter than the 6BT, it’s still a large engine, especially for a four-cylinder.

Out of the units listed above, weight is the most surprising. While most four cylinder come in around 400-600 lbs, the 4BT weighs a hefty 750+ lbs (the exact number depends on engine dressings and fluid level.) Horsepower may seem relatively low, especially for a 3.9L engine, but you must remember that the 4BT was designed for low-end torque and superb reliability. The post-1998 version, 4BTA, had a significant power bump thanks to its jump from eight to sixteen valves.

Thanks to its size, power output, and mechanical fuel injection system, the 4BT can be found in a plethora of different applications. It’s not uncommon to see this engine in industrial equipment. The most common place you’ll find a 4BT is in bread trucks. These are large trucks which may have a relatively heavy payload, but have a tiny engine bay, making the 4BT the obvious choice. There is not any official list of 4BT applications, but bread trucks are definitely the most common application. Modern applications have since moved on to newer and more efficient diesel engines including the R2.8 Cummins.

The 4BT is by no means a performance engine. As we said above it was used in applications such as bread trucks and the numbers show it. Outputting a measly 105 horsepower @ 2,300 RPM and 265 lb-ft @ 1,600 RPM, it’s far from a screamer. Of course, the 6BT is also very weak straight from the factory, but with some modifications to the fuel system and fuel timing, big power can easily be achieved. The common 6BT fuel modifications apply to the 4BT, as they share the same fuel pump and injectors.

If you want big horsepower, a turbocharger upgrade is a great place to start. An HX35, HE341, or HE351 are great budget options which will flow significantly more air than the stock 4BT turbocharger at the cost of throttle response. All 4BT applications lack an intercooler which is great for packaging constraints but terrible for power. An intercooler is a great way to pick up horsepower and improve power consistency by keeping charge air temperatures lower.

As far as fueling is concerned, upgraded injectors are an excellent place to start, but are not necessary for small power increases. The P7100 fuel injection pump is the same one found in the 6BT. Sliding the Air Fuel Control assembly forward will result in power gains by adding fuel at low RPM. You can also ground down or remove the fuel plate which is what controls the maximum fueling. By sliding the AFC assembly forward and grounding down the fuel plate, you can see gains up to 100hp and 200+ ft-lbs. Fuel timing is crucial on the 4BT, so be sure to set it right, or you may have a blown engine on your hands. 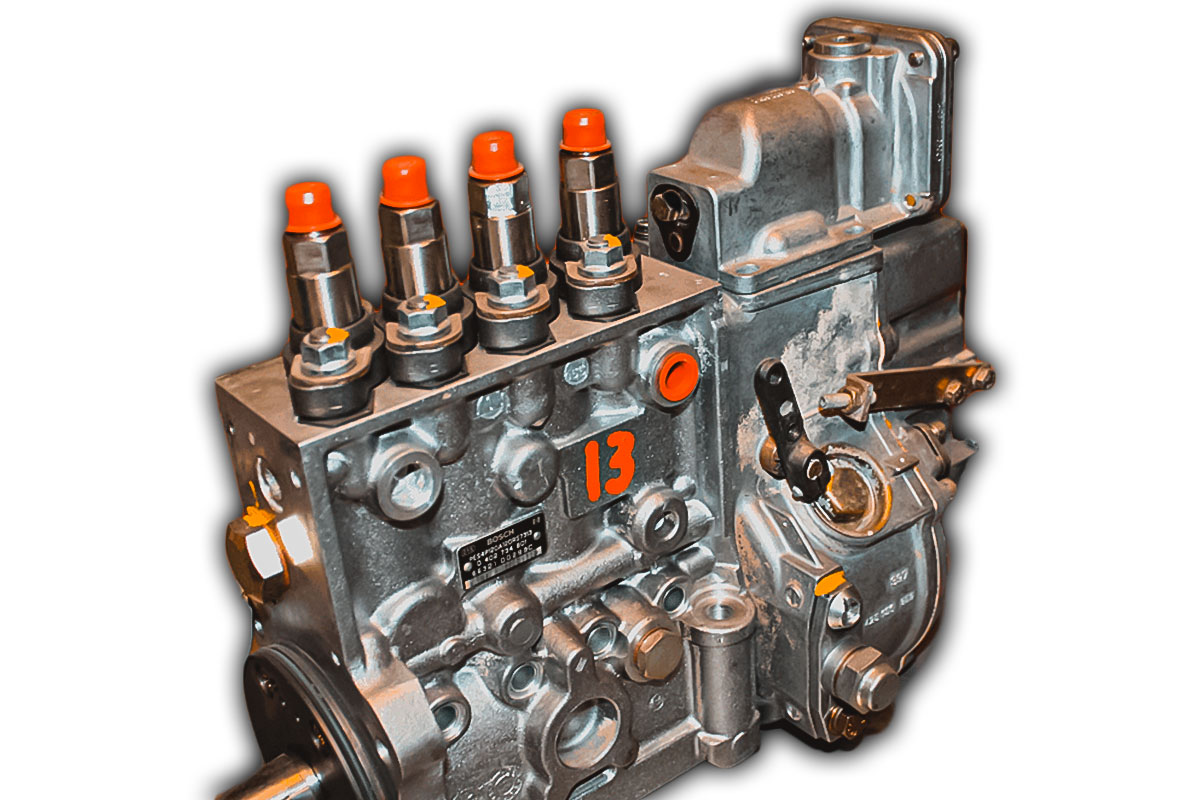 Tuning potential depends entirely upon budget, but it’s not too hard to get a 4BT up to 300 horsepower and 700lb-ft. It should be noted that the fueling modifications listed above apply only to 4BT engines with the Bosch P7100 pump. Models with the later VE-pump require different modifications. Check out DrivingLine’s P-Pump Cummins fuel modifications for more detailed information.

So from everything, I’ve told you so far, why would you want to swap a 4BT into your vehicle? If you’re able to fit a 6BT 12 valve into your vehicle, then that is probably the way better option. It’ll make more power, last just as long, and might be cheaper to buy.

The real reason you might want to swap a 4BT is for fuel mileage, and size constants. A 4BT barely fits into an XJ Cherokee with a 6″+ lift, so a 6BT is definitely out of the question for many Jeep owners. If fuel mileage is your legitimate reason for swapping, then the 1.9 TDI from VW is a far better option.

So what have we learned so far? The 4BT came in heavy duty applications such as bread trucks, it’s nearly identical to the 12-valve, it responds to modifications just like a 12-valve, and it’s incredibly reliable. Many 4BT engines have gone way past 300,000 miles.

Jeep people love the 4BT because it is pretty much the best diesel that can fit inside of a Jeep other than the much less common 1.9 TDI swap. Let me know what you think of the 4BT in the comments below! Also check out our 6BT Cummins: Everything You Need to Know article!