The Mustang is one of the most instantly recognizable automobiles on the market. Since 1964 it has held a spot in American iconography as a symbol of freedom and power. If you’re cruising down a desolate stretch of interstate in the southwestern United States in a convertible Mustang congratulations Sir or Madam, the only way you could be more emblematic of America is if you had a bald eagle riding shotgun serving you some fresh apple pie.

While it seems like the Mustang is a staple of Americana now it wasn’t always the golden child. In the 90’s it was almost replaced by the Probe (Anybody remember the Probe?) and before that, it almost killed itself as….the Mustang II.

The Mustang II is almost a shorthand joke at this point, like New Coke.

The problem with this line of thinking is that, at the time, it was the right move.

In the early 1970s, the main source for U.S. oil and petroleum was the oil-producing countries located in the middle east. All through the 60’s gas had been cheap and readily available. Just look at the muscle car boom of the era. The big three were putting big blocks and monster motors in anything with wheels. It was like an episode of Oprah, “YOU GET A V8 OPTION, YOU GET A V8 OPTION AND YOU GET TWO!” It is because of this cars got larger, more luxurious and just heavier in general. Looking at the mustang’s growth between 1965 and 1971 is a shocker in itself. It’s really the automotive equivalent of the freshman fifteen.

Then 1973 happened. That year the countries that exported oil to the U.S. (OAPEC) decided to restrict exporting which threw a hellacious monkey wrench in the sales of anything with a V8. Gas prices went up at a staggering rate. The Japanese companies who had slowly started to build a presence in the U.S. found their sales booming due to the fuel shortage. Their small economical cars could save their owner enough money over an American V8 that it was almost a no-brainer. 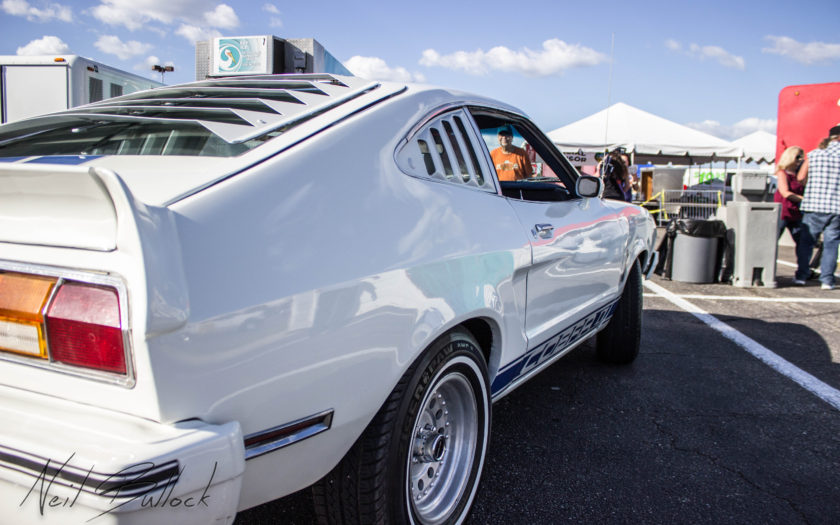 The big three seemed to be caught off guard and had to move fast. While most just put smaller, more restrictive engines in vehicles they had already been developing Ford went a different route with a whole new Mustang.

New might be a strong word. It borrowed heavily from Ford’s other smaller cars like the Maverick and the Pinto and looked like…well…a 7/10ths Mustang.

In retrospect, things didn’t look good for the Mustang II. The consummate competitor Chevy Camaro continued in the larger coupe/muscle car category while the Mustang II went down in size into what we would call a compact size now.

Here’s the interesting thing about all this, we now think of it as a flop but actually in 74 it sold surprisingly well. It was a compact economy car you could have fun driving, if the first Mustang was the birth of the pony car then the Mustang II was the birth of the fun to drive Econo-coupe. It was such an entertaining car that Motortrend made it the “Car of the year” in 1974. 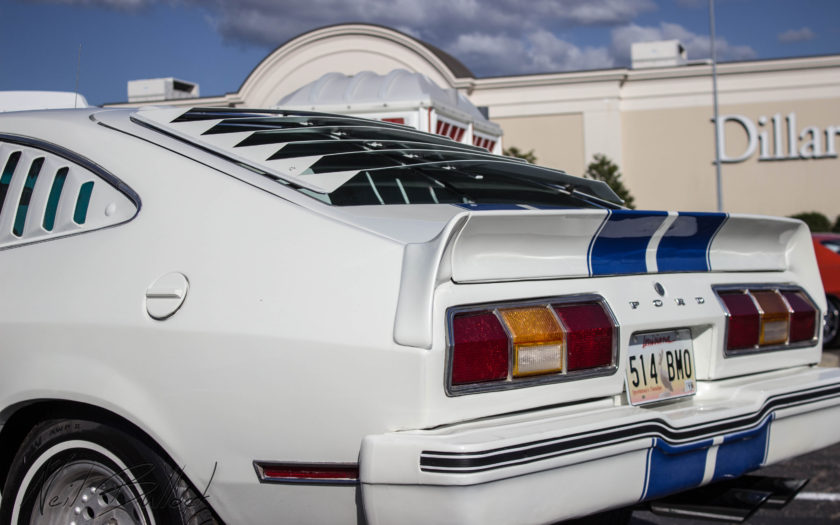 Over the course of the Mustang II’s life, it changed and grew to accommodate what the public wanted. As the oil crisis waned people started to thirst for more. The Mustang II’s tiny four-cylinder and six-cylinder engines eventually made way for a V8 that, let’s be honest, made less horsepower than a modern four-cylinder. That could be said for most every “Muscle” car of this era though so we can give it a pass.

The Mustang II eventually became the Cobra II that you see here which is, in my opinion, pretty cool. After Ford went smaller and lighter with the Mustang II the lessons went on to help build the lighter platform for the Fox Body Mustang which would be in service from 1979 to 1993. Another ringing endorsement of the II is that its steering/suspension components were so good that to this day people use them as donors for muscle car and restomod builds.

It’s time we acknowledge the Mustang II for what it actually is, a product of its age. We may laugh at it now but I’ll always have a soft spot for it and maybe, just maybe, a spot in my future garage.