Old truck guys are very familiar with the good old Chevy big block. The Chevy C20 my father owns has a 454ci big block, and man can that thing pull. If towing is your main concern, then a diesel is probably your best option. But, what if you want a gas truck? That’s where the Vortec 8100 comes in.

The Vortec 8100 is rather obviously an 8.1L V8. It was designed as a diesel alternative in the GM pickup truck line-up. The Vortec 8100 borrowed much of its design from the 454ci big block we all know and love. The main difference between the 8100 and big blocks of old is the increased stroke. This is what increased the displacement to an impressive 8.1 liters.

You might be wondering, why isn’t this massive engine used in a performance application? The Chevy LS is super popular so why isn’t this engine? Well, there are quite a few things holding the Vortec 8100 back from ever becoming popular:

Like I mentioned above, the Vortec 8100 was used in GM pickup trucks as a diesel alternative. But, it was also used in a few other applications:

As you can see, the Vortec 8100 was used in a host of different vehicles. Chevrolet offered it in all of their heavy duty applications. The coolest application would have to be the T-98 Kombat armored vehicle.

RELATED: 4BT Cummins: Everything you Need to Know 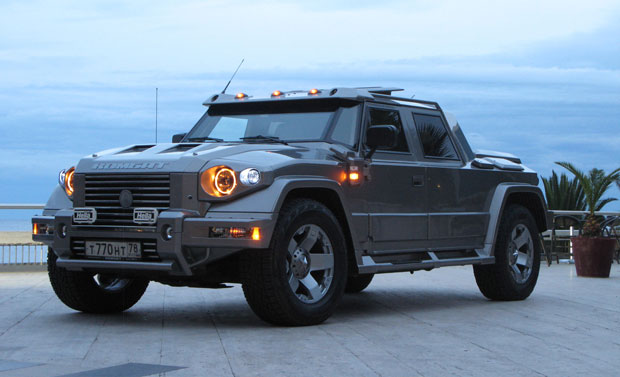 This part gets a little interesting. If the Vortec 8100 is supposed to be an alternative to the Duramax engine, then it must create lots of torque. Torque at low RPM is one of the single most important factors of a heavy-duty engine. So, how does the Vortec 8100 do? For this, we’ll look at the performance data for the GM truck applications.

I know what you might be thinking. “Why does an 8.1L only make 330 horsepower?” If this was a performance application that would be abysmal, however, this is a heavy duty application. It makes an impressive 450 lb-ft way down low in the RPM range. Other versions of the Vortec 8100 make as much as 550 horsepower and 690 lb-ft.

The Vortec 8100 isn’t super impressive in stock trim, but it’s designed for heavy duty work. Like I said earlier, standard big block parts won’t fit on the Vortec 8100, so the performance parts available for it are close to none. However, this is one company who offers some very interesting Vortec 8100 parts.

Raylar Engineering is pretty much the only company interested in the Vortec 8100. They have developed multiple stroker kits to take it from 496ci to 511ci or all the way to 540ci. They also offer everything from camshafts to blowers. Their stage 3 package 540ci engine will make an insane 685 horsepower and 680 lb-ft of torque. Unfortunately, the stock Vortec internal components are fairly weak so any heavy modifications will require a forged bottom end.

RELATED: 6BT Cummins: Everything you Need to Know

So, Raylar Engineering makes a bunch of really cool parts to wake your Vortec 8100 up, but is it worth it? If you’re just towing their towing camshaft and the 511 stroker kit will be a killer combo for you. If you want to go fast their bigger camshaft and 540 strokers will make big power for you.

Most of the trucks that are equipped with the Vortec 8.1 could’ve been equipped with a Duramax instead. Why would someone take a gas engine over a diesel in a heavy-duty truck? Although the Vortec 8.1 was designed to be an alternative to the Duramax, why would you want the gas engine? The main reason for this is diesel availability. Diesel isn’t available at every single fuel station, unlike gasoline.

As far as tuning potential it’s pretty obvious the diesel can and will make way more torque. You can easily get 800 lb-ft or more from a Duramax, good luck achieving that with a Vortec engine. Not only that, but the Duramax will also outlast the Vortec 8.1 engine. I’m not saying the Vortec engine isn’t a bad choice, but given the opportunity, I would always pick the diesel first.

Although we love LS engines, they aren’t exactly built for the same purpose as the Vortec 8.1. A 6.0 LS would make an excellent engine for a high horsepower street car, but not a truck that tows stuff a lot. The Vortec 8.1 was designed for maximum torque at a very low RPM. This is what allows it to tow much better. The 6.0L engine, however, is designed for more general use.

You could always supercharge or turbocharge a 6.0L to achieve the same torque as a Vortec 8.1. The only problem is the factory reliability won’t be there anymore. When introducing power adders the longevity of your engine is significantly compromised. I know people claim to have excellent reliability with modified engines, but there’s a reason why manufacturers don’t push engines that hard from the factory.

The manufacturers thoroughly test their engines for longevity and reliability. Once power is increased, long term reliability is decreased. Hence why the Vortec 8.1 can reliably achieve a much higher torque number than a 6.0 LS.

So, the Vortec is an excellent heavy duty engine. It nearly matches its diesel brother in torque and beats it in horsepower. But, due to its heavy weight, it is rarely swapped into hot rods. It is slowly becoming more popular thanks to companies like Raylar Engineering who can turn it into an absolute monster. Let me know what you think of the Vortec 8100 in the comments below!

About Bryce Cleveland 278 Articles
Bryce founded Dust Runners Automotive Journal in 2014 as a way to write about the cars he found interesting. He currently owns a 2003 Honda CRF450R Supermoto, 2006 Nissan 350Z, and a 2018 Yamaha MT09. Follow him on Instagram for more @bryce.cleveland.