The release of the F-chassis BMW’s back in 2014 delighted Bimmer fans all around the globe. Many people knew how well the previous E90s generation responded to tuning, and enthusiasts were stoked to see what the next generation could bring to the table.

Their expectations were met, as the BMW M3 F80 and its coupe version, the M4 F82, have proven themselves to be an impressive platform for various performance modifications. One of the most popular parts enthusiasts got for their BMW M3 F80 are exhaust systems.

Exhaust systems have a crucial job for the car, and that is to expel the burnt gases as efficiently as possible. And although the stock exhaust system did its job pretty well, it’s still too restrictive for the likes of many.

Many tuners have decided to replace their OE exhausts in place of the ones offered in the aftermarket. Aftermarket exhaust systems do what a stock exhaust does, but only better.

You can get many perks from a BMW M3 F80 exhaust system, but the most prominent one is the improved sound quality. In fact, many Bimmer fans get their hands on one just to improve the quality of the sound their cars create.

We made a list of six of the best exhaust BMW M3 F80 exhaust systems you’d see in the market this 2021. Check them out below! 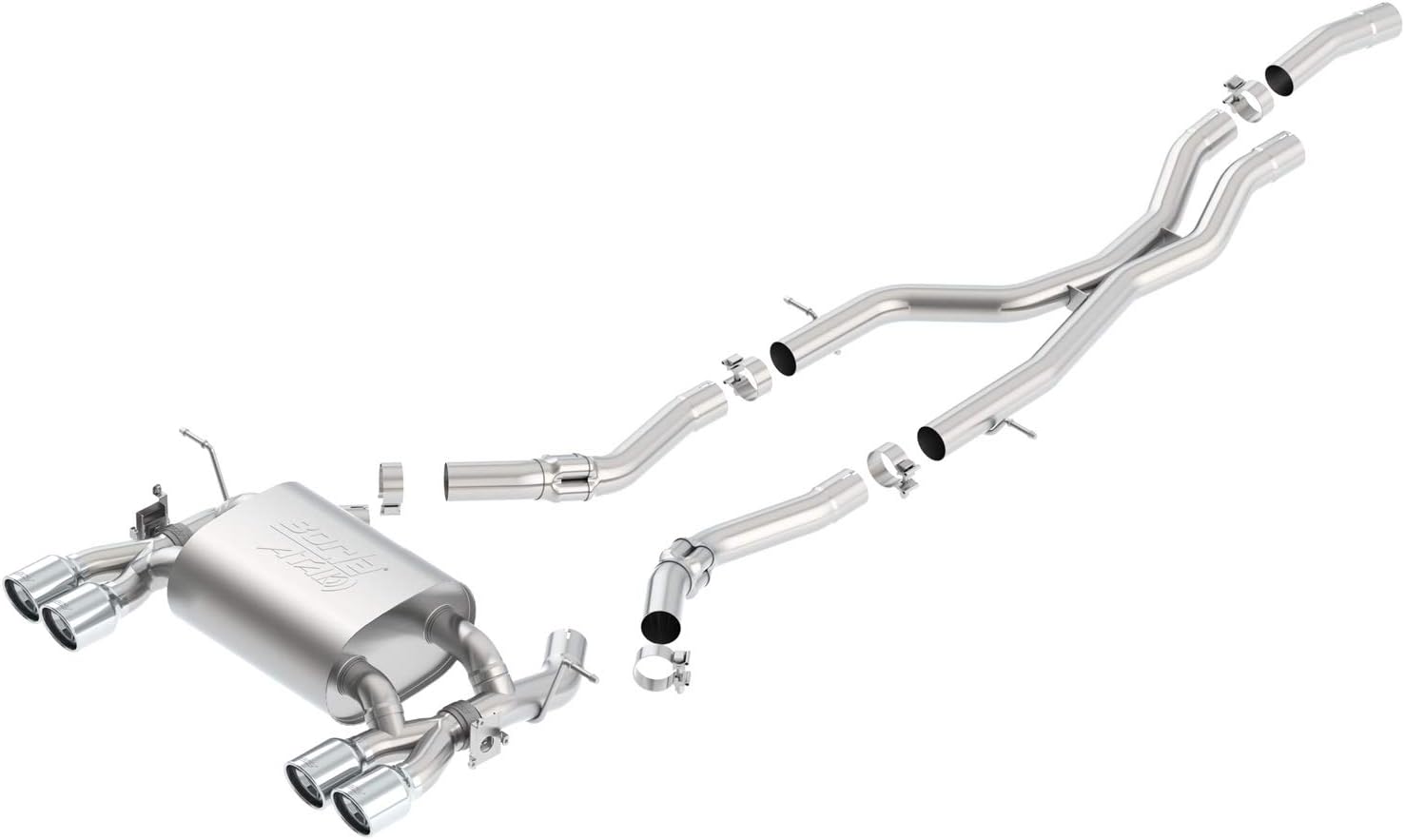 The Borla ATAK Cat-Back Exhaust System is for car enthusiasts who prefer an aggressive exhaust grunt over a mildly sounding one. If you’re not familiar with Borla, they’re widely known for making exhaust systems imbued with a type of sound only Borla can create.

They’ve got other exhaust system series, but perhaps the most popular one is the ATAK exhaust. These ones can emit an aggressive and predatory growl that matches the identity of a sports-oriented BMW M3 F80.

The ATAK Cat-Back Exhaust System utilizes a merge X-pipe that pushes the exhaust gases faster as the engine spins faster. The components are made from T-304 stainless steel, far more corrosion and rust-resistant than its T-409 stainless steel counterpart.

What’s more, this exhaust system incorporates Borla’s Polyphonic Harmonizer Technology, which is responsible for delivering clean, rich, and full-bodied sound to the mufflers. This works exceptionally well with the ATAK mufflers, as it enhances its sound to be much more bassy and volume appropriate.

Although this exhaust system doesn’t shrug off performance, it’s primarily concerned about how much it can improve your car’s sound quality. Because of the ultra-smooth mandrel bent pipe used by the system, any hidden horsepower will be unleashed.

However, note that cold starts can be brutal for easily annoyed neighbors, especially in the morning. On top of that, you may hear a slight drone at around 75-79mph, but it’s livable.

Loud and aggressive sounding cars are great, but it’s not everyone’s cup of tea. Some people prefer something to keep them lowkey but capable enough to announce that they’ve arrived in the area.

If you belong to such a group of people, then you’d benefit a lot from the Touring Series Axle-Back Exhaust System made by Magnaflow. This exhaust system can deliver a moderate level of exhaust grunt; not that loud, but deep enough to give you auditory satisfaction.

Axle-backs are notorious for being cheap. The caveat with them, however, is that they don’t offer much performance improvement. On the bright side, they offer a ton of perks in terms of sound quality.

As for the Touring Series, it’s moderately loud on the outside and pretty mild on the driver’s seat. And also, it doesn’t divert much from the sound quality that the stock exhaust creates. It’s much more profound and slightly louder, though, so that’s a plus.

Magnaflow is renowned for making superb quality exhausts made from stainless steel. They ensured that even if you’re getting an axle-back exhaust system, you’d still have a bang-for-the-buck product.

According to its previous owners, it’s called a pretty perfect fitment and a nice grunt at wide-open throttle. Keep in mind that you’d observe some drones at some areas of the power band. But other than that, we would argue that this exhaust system is a pretty good buy. 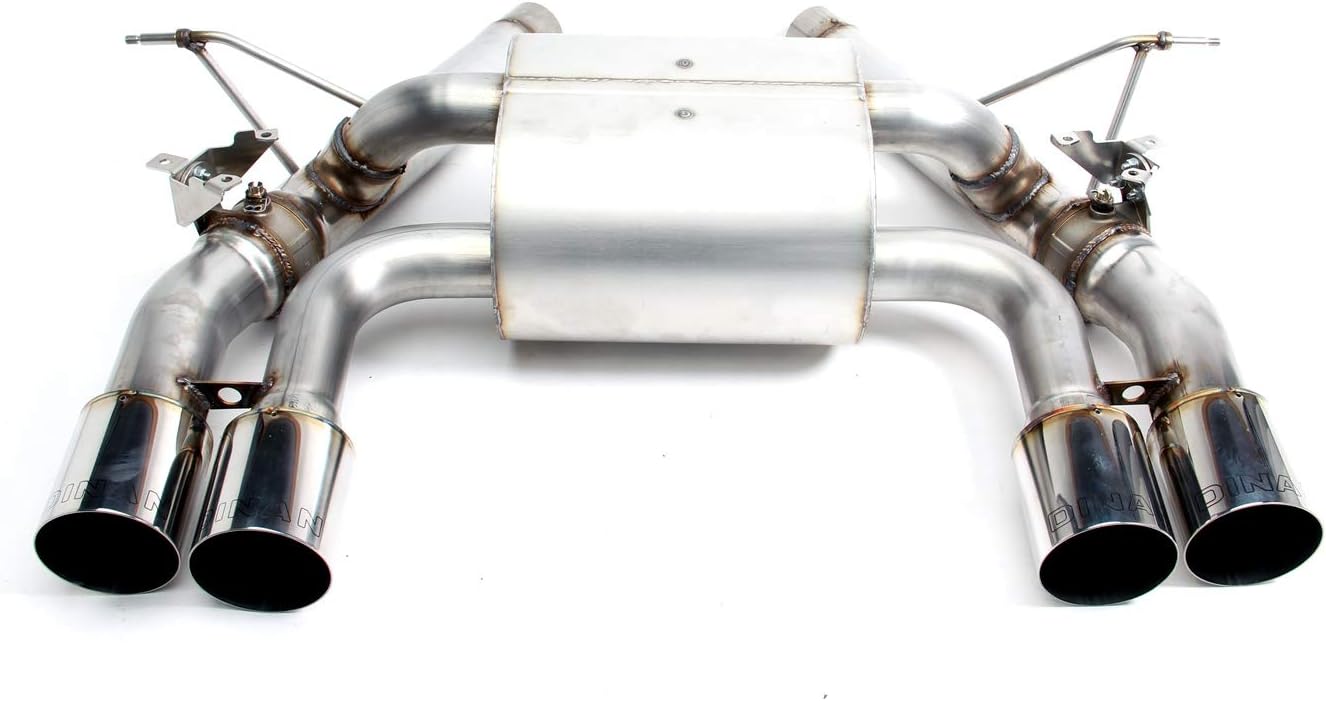 The BMW M3 F80 is an athletically built car that looks great when displayed in a showroom. Partner such an aesthetic sight with an aural delight like the Dinan, and it’ll make the vehicle 10x more fun to drive.

Dinan is a premier BMW tuner, so they pretty much know what Bimmer fans want, and they clearly took advantage of that knowledge. Just by looking at the Dinan Free Flow Axle-Back Exhaust System (and, of course, some reviews), you’d see that it’s got potential.

The BMW M3 F80 Dinan exhaust is an axle-back, meaning it won’t add substantial power compared to cat-backs. Dinan claims that this exhaust can add up to 5hp, but you wouldn’t really feel any difference unless you partner it with a suitable aftermarket downpipe.

It’s made from 100% stainless steel and can provide a much larger exhaust path for the departing gases. Yes, it may improve your car’s performance by a little bit, but it can guarantee you an upturn in your car’s sound output.

Most M3 F80 owners with the Free Flow Axle-Back Exhaust System would tell you that it’s more bassy than the stock. On top of that, there’s virtually no drone, unlike most exhaust systems out there.

The change in sound over the stock is subtle; nothing changed too dramatically. Add to that the fact that it looks exceptionally well with the black ceramic quad tips when you glance at it from the back.

If you’re bringing your BMW M3 F80 into the world of motorsports or any bold type of driving, then you’d better check out what Akrapović has in store for your car.

Akrapović is pretty famous worldwide for many good reasons, but the most prominent one would be their use of titanium for their exhausts. Titanium is highly durable and serves as an ideal replacement for the stock due to its lightweight properties.

So what does the Akrapovic Slip-On Titanium Sport Exhaust bring to the table?

It utilizes bigger pipes than the stock exhaust, which yields lower backpressure and more power at high revs. And since it’s made from titanium, it’s much more durable in comparison to T-304 stainless steel.

It’s also lightweight, as we’ve mentioned earlier. And most importantly, Akrapović tailored its sound to highlight lower frequencies, made explicitly for the auditory enjoyment of the driver and anyone who’s near the revving car.

The sound quality of this exhaust system adds a lot of character to the already iconic car. You’ll even notice that the sound pops in between wide-open throttle shifts. Whenever the ECU takes over during wide-open throttle, the EDC throttle modulation activates.

This causes the exhaust to backfire in rapid succession, making the car sound as if it’s blasting a machine gun.

What’s more, you’ll notice that the titanium tips will have a blue-ish appearance once you’ve driven the car around for quite some time. This is because the titanium reacts to the thermal load it went through once used heavily.

Such a phenomenon will give the exhaust tips a blue hue that definitely adds a lot of style points to the overall aesthetics of the car.

Quick note: The Akrapovic Slip-On Titanium Sport Exhaust is a racing exhaust system. It uses sports catalyzers, which alter or delete the necessary emissions equipment you may need to pass your state’s emission standards.

The Eisenmann Gold Series Heritage Exhaust System is perhaps the best-looking exhaust system we have on this list. Eisenmann engineers have painstakingly taken their time to ensure that this exhaust is at the pinnacle of aesthetics and performance.

Eisenmann is an expert in making high-end aftermarket components for cars like the Porsche and AMG. Once you’ve seen this BMW M3 F80 Eisenmann exhaust, you can clearly tell that it’s a bit of an overkill, but in a good way.

Quality-wise, the Eisenmann Gold Series Heritage Exhaust System is phenomenal. Every part of it was made with excruciating attention to detail in mind.

From 304 stainless steel with completely uniform wall thickness to the highly rigid muffler design that contributes to its strength and longevity, you can see that it’s no joke. Sound-wise, it’s absolutely insane.

It has an aggressive and intoxicating sound output at load but is reasonably civil under normal driving conditions.

And oh, let’s not forget about the elephant in the room: the exhaust’s style and aesthetics. Its stealthy black finish isn’t even tiring to look at any time of the day. The exhaust gold tips were meticulously detailed with a gold finish, making it a sight for sore eyes.

However, the caveat with this exhaust is it’s costly, even for the taste of seasoned tuners. But perfection comes at a price, and such kinds of BMW M3 F80 exhaust systems would simply reward whoever’s worthy to wield it with premier aesthetics, sound quality, and performance.

Lastly, we have the Armytrix Valvetronic Cat-Back Exhaust System, one of the most critically acclaimed exhaust systems in the BMW M3 F80 community.

Armytrix is popular for their top-tier quality exhaust that genuinely provides what most Bimmer owners want the most: impressive sound quality, dyno-proven performance, and a stylish design.

Their exhausts are undoubtedly high-end, and they’re pretty famous for their use of Valvetronic exhausts: the cream of the crop of exhaust systems.

The Armytrix Valvetronic Cat-Back Exhaust System is a high-end Valvetronic T-304 stainless steel exhaust system. For those who don’t know, a Valvetronic exhaust allows you to modify your exhaust sound output at the push of a button (a topic for another article).

Armytrix claims that this exhaust system can give you as much as 22.5hp and 30.3lb-ft of torque. That’s a pretty bold claim, but Armytrix is confident about that, and the community is there to back it up.

What sets this BMW M3 F80 Armytrix exhaust apart from the rest are the Valvetronic system and their exclusive OBDII dongle system. Their dongle can make installation 50% easier!

On top of that, they even have a smartphone app that can give you an insightful look into the real-time operational status and complete control over the exhaust’s valve settings.

This kind of convenience is rare, and luckily, Armytrix has done it already for you.

Aftermarket BMW M3 F80 exhaust systems mainly revolve around the idea of sound improvement. Some manufacturers decided to crank the standards for exhausts a bit higher by introducing some innovations and aesthetic improvements.

Our selection above comprises the exhaust that we believe will make your car sound and look best. If you think we’ve missed out on some other exhaust, please let us know in the comments below!