That sentence alone is almost enough to commit someone into psychiatric care, or at least a very good shrink.

Before you decide that I’m fit for a straitjacket let me explain myself. I know I’m the new guy here and you don’t know me from any other internet nutjob but I swear I’m not crazy. I’m just overly optimistic about my ability to wrench on and maintain vehicles. I mean I’ve done plenty in my day. Honestly more out of necessity than desire. When I was younger I couldn’t afford things like “Reliable transport” and “Air Conditioning” and sometimes such luxuries as “Doors.” In other words, I bought crap and couldn’t afford to pay someone to fix it. The need to fix my cobbled together pieces of conveyance created a love for it. Though it’s less like love and more like Stockholm syndrome, you do something enough, I suppose, you start to love it.

Now, back to the eclipse. I first saw this car years ago parked under a shed at a friend’s house. It was actually in the background of a picture of his new C4 ZR1 he had bought. I immediately ignored the immaculate DOHC ‘Vette and asked: “HOLY SMOKES WHY DIDN’T YOU TELL ME YOU HAD A 1G ECLIPSE I NEED IT IN MY LIFE CAN I TOUCH IT???” (I don’t have a ton of friends…) It was just like the one I had in high school….but it has the 4g63 2.0 and not the 1.8! And flip up head lights!

Turns out the car had been sitting in a shed for several years. It wasn’t even his, it was a friend’s who had left it there with an undiagnosed overheating disorder. The friend, now a pilot who lives about a thousand miles away in Denver who had never come back for the poor pitiful little GSX.

He sent me more pictures of the car and all I could hear was “In The Arms Of The Angels” By Sarah McLachlan, puppy savior. I knew I had to save the car one way or the other. The following two and a half years were an aggravating back and forth. The original owner wanted, what I felt was too much. I offered him too little (2 sticks of gum and a Shrek 2 DVD case may have been a touch insulting but whatever, I had it at the time).

So the car went for sale online and I watched it, waited, every day I would see someone on some DSM page share it and want someone to go get it. Months passed as the poor little AWD coupe sat out in a field after being kicked out of the shed. I would go up on my offer a few times (One day as high as a whole pack of gum and 7/11 cup I had forged Kurt Russel’s signature on) but it evaded me still.

Then one Saturday, not long after my daughter was born, I got a message.

“Can you get the car this week?”

Then we bartered back and forth for about an hour. This has to be one of my favorite parts of old crap car buying. It’s like watching “Pawn Stars” but you don’t have to wait on the guy’s buddy who is “A total expert in 91 Eclipse GSXs that have sat in a shed for a decade.”

When it was all said and done I was the proud owner of a Mitsubishi GSX for the grand sum of $300. The next day I went to bring it home, not knowing what to expect I brought a compliment of tools and parts just in case I could get it started and drive it up on the trailer. I wasn’t holding my breath though. Worst case scenario was that the brakes had seized and it wouldn’t start and here I was with a trailer with no winch and a $300 lawn ornament. 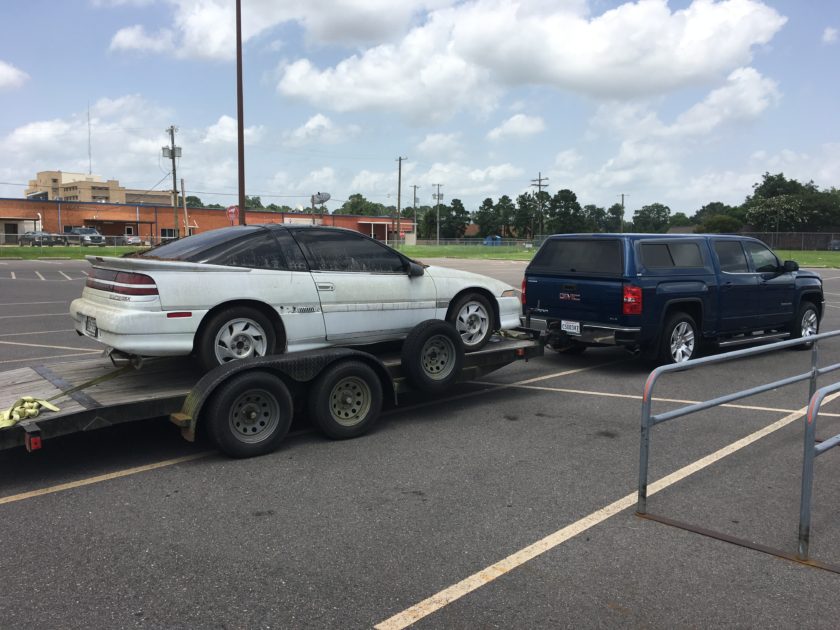 I thought to myself “No way is this going to be easy…” Well, I was wrong. It was shockingly easy. All the old 4g63T needed was some fluids, a fresh battery and to put some air in the tires. Voila, it lives! It was gushing water like the fountains at the Bellagio but that’s a minor thing (right?). The Turbo worked, the clutch worked, the brakes were locked up but a little back and forth got them loose again and even the flip up headlights worked! It was a July miracle!

From that point I drove it straight up on to the trailer, strapped it down and left. I wish I could say that was the happy ending but anyone who has bought a project car knows that this is only the beginning of a long, expletive-filled journey that will leave me either

After I headed back with my new found turbo jewel in tow I took it through a coin wash, cleaned it up a little and brought it home. If you’re interested in this project and how I plan on dominating a cheap car challenge with it leave me a comment and I’ll add an update post soon. You can also follow the build on my youtube channel.