Hot hatch enthusiasts searching for MK6 GTI exhausts on the internet may find the effort quite challenging. Aftermarket auto parts manufacturers have indeed created quite a selection of exhausts for the Volkswagen MK6 GTI, and each of them would claim that they can give you the sound output and performance benefits you want. But really, which of them are worth the attention?

If you’re planning to get yourself an aftermarket exhaust system, then you should know that most of them won’t actually give you a substantial amount of power gain. Even if they did, the changes wouldn’t be that obvious. At best, an exhaust system can give you 10% extra horsepower, depending on how good its quality is.

If you’re concerned about improving the sound quality of your car, preferably something to make it sound more aggressive and eargasmic, then you should know that you have no shortage of options. Each one offered in the market has its own sound output that may or may not fit your taste.

We know that choosing the right exhaust system for your hot hatch can be difficult. That’s why we made a list of the best sounding exhaust systems for the Volkswagen MK6 GTI that are sure as hell, bang for the buck. 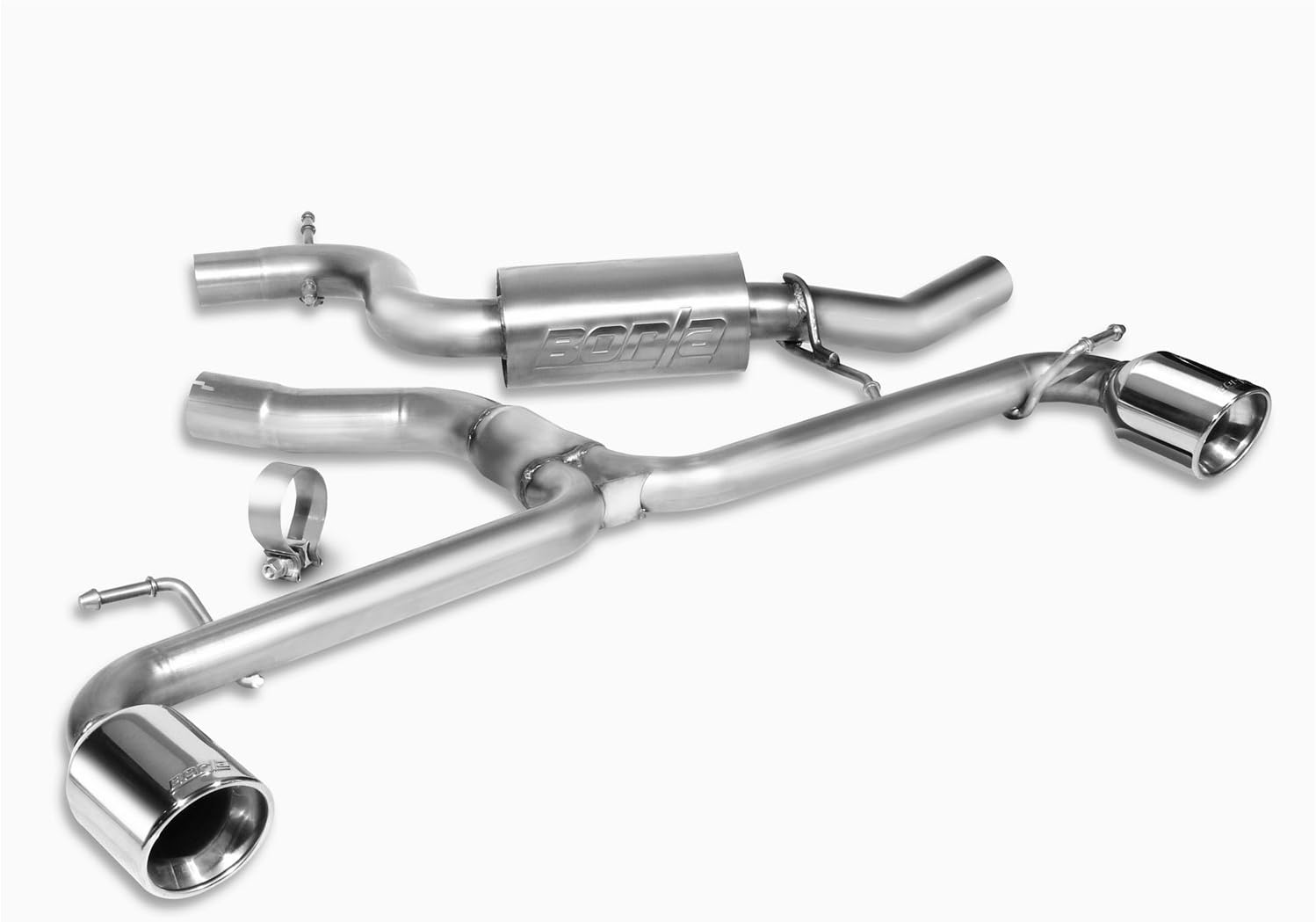 Borla is widely known for the distinctive tone that their exhaust makes, especially the ATAK Series. But little do enthusiasts know, Borla also has a variety of exhaust systems to offer as well. From moderate sounding to loud and aggressive ones, you can expect that Borla has got your back. For the Volkswagen MK6 GTI, Borla has the S-Type Cat-Back Exhaust System, a breath of fresh air from their widely popular ATAK exhaust variant.

If you’re familiar with the ATAK series, then you’d know that they’re the most aggressive sounding exhausts Borla has on their arsenal. Instead of being overly loud, the S-Type exhaust system sports a moderate touring exhaust tone. It’s not obnoxiously loud, yet it’s not that silent. GTI owners love this MK6 GTI exhaust because it’s not too loud, but it’s tasteful enough to attract everyone’s attention, especially once you go WOT.

The package comes with a 2.5” intermediate pipe and a 2.0” tailpipe with a 4.0” outlet pipe. The outlets come with some classic rolled-edge slash-cut polished exhaust tips that look great on the MK6 GTI. Borla made this exhaust system from 304 stainless steel to ensure corrosion and rust at bay while keeping the price relatively affordable.

Note: This exhaust system might not sound satisfactory at first, but give it time. The more you drive your car with this exhaust on, the more carbon will build up in it, and there will be less metallic sound. This will result in a much more satisfying sound. 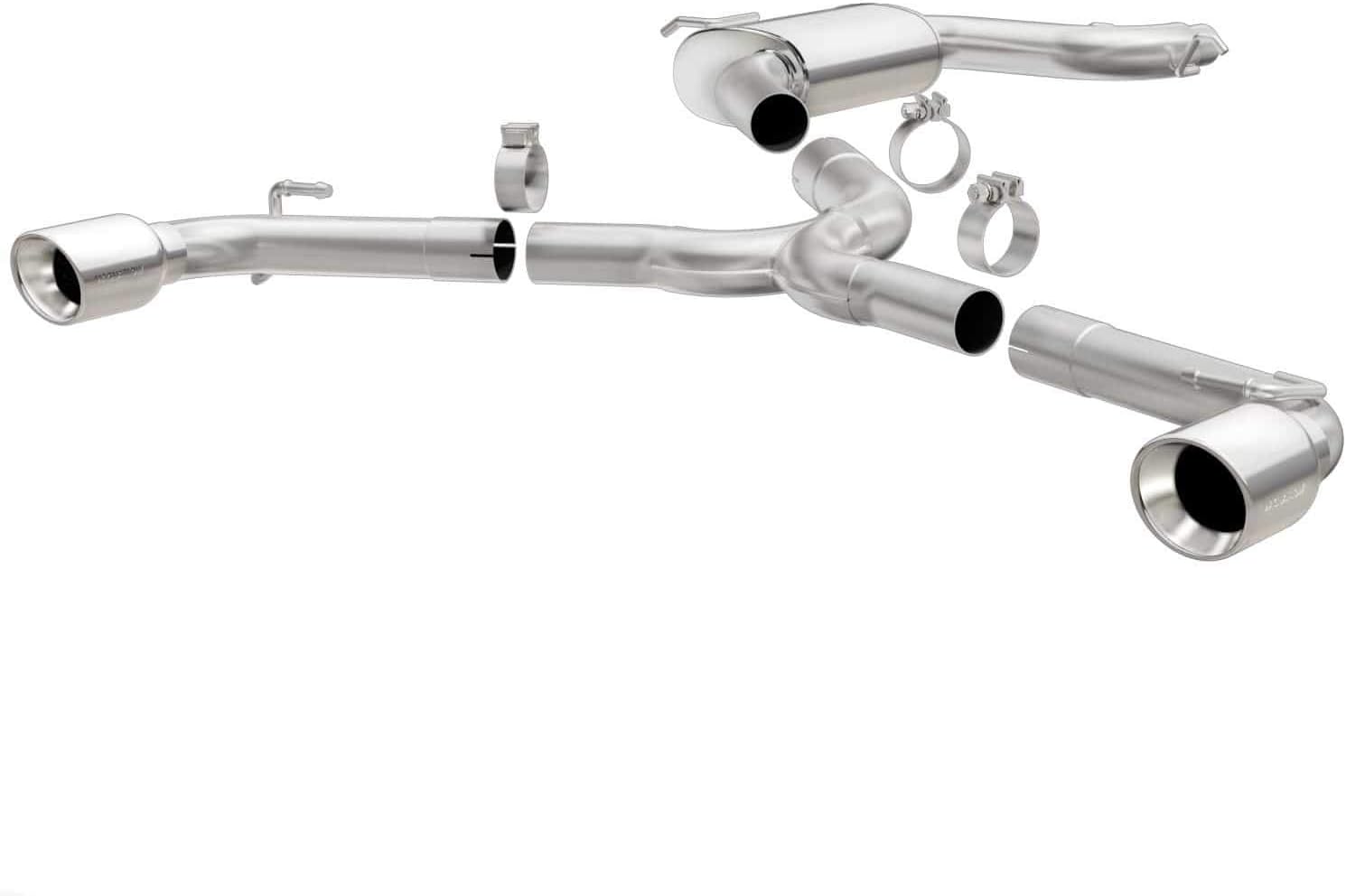 If it’s the tried-and-tested touring exhaust sound you want, then you can never go wrong with Magnaflow. Many people know them because of the high-quality stainless steel exhaust systems that they create. And oh, did we mention their exhausts sounds exceptionally well too?

For the Volkswagen MK6 GTI, Magnaflow has the Sport Series exhaust system. Many GTI owners love this bolt-on exhaust because of how awesome it sounds and how light it is. The sporty exhaust note it creates is just too satisfying once you hear it: it’s rich, deep, and aggressive enough to let people know that you’ve got the best car around.

The Magnaflow Sport Series Cat-Back Performance Exhaust System is a cost-effective solution for your auditory satisfaction. It uses a 3.0” intermediate pipe and a 2.5” tailpipe with a 4.0” exhaust outlet tip. The larger intermediate pipe then paves the way for better exhaust flow. There’s also less resistance within the pipes, allowing the exhaust to flow out of the muffler much faster.

Since the Sports Series uses a straight-through muffler, you can expect that you won’t hear much when it’s on idle. It sounds mellow at cruising speed and very aggressive once you’ve decided to go hard and put the pedal to the metal. The noise clearly increases depending on the level of the RPM, so expect a much more enjoyable ride when you’re in full throttle. 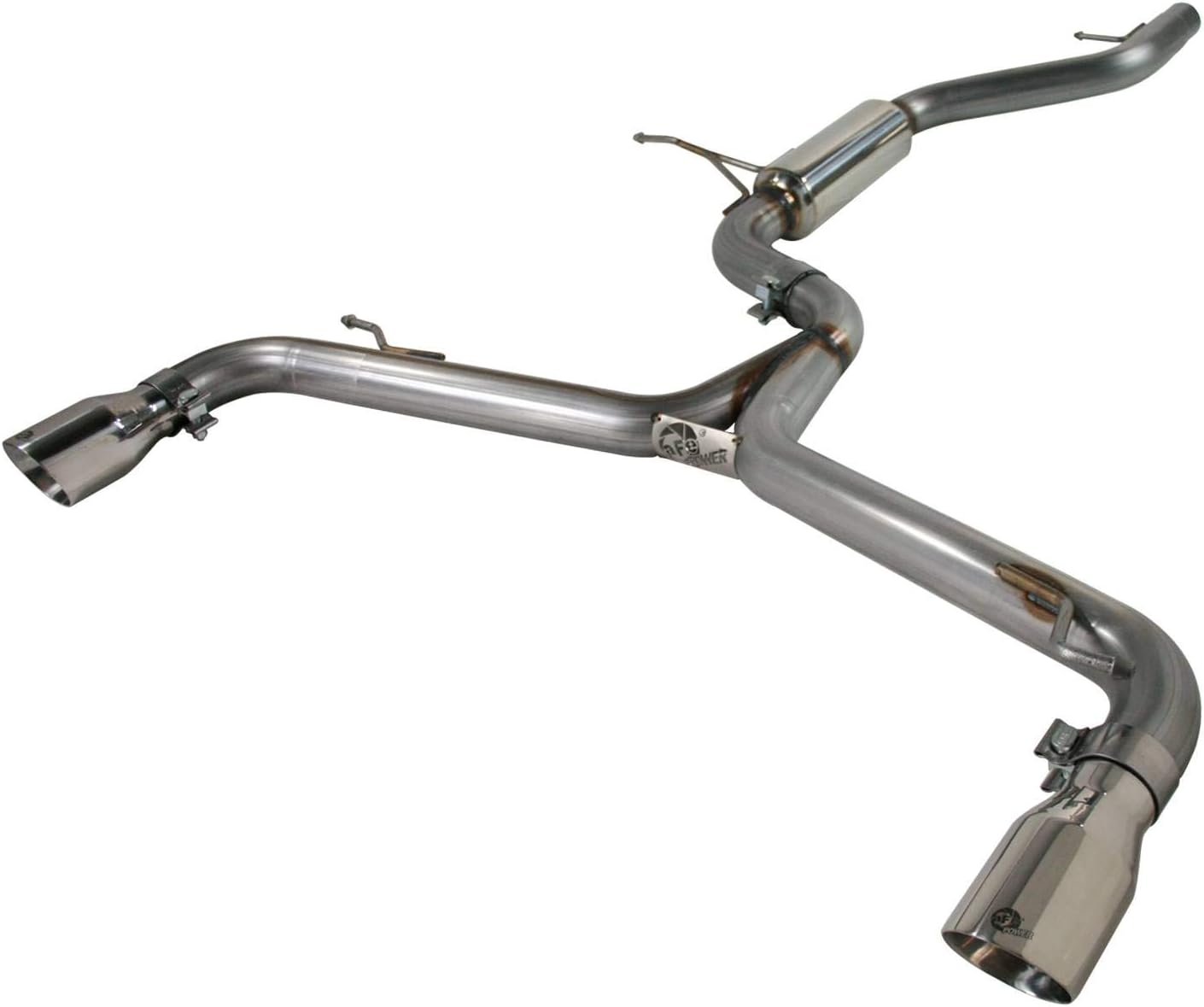 Most people would know aFe Power for their pretty reliable intakes, but some don’t realize they also make some rad exhaust systems. A great example of such an exhaust system would be the MACHForce XP. aFe Power claims that these kinds of MK6 GTI exhausts can produce an extra 10hp and 9lb-ft of torque.

Made from 409 stainless steel, this exhaust system comes with a mandrel-bent 2.5” intermediate pipe and a tailpipe of the same size. The tailpipe then ends with two 3.5” stainless steel exhaust tips. aFe Power made these polished, double-wall, angle-cut exhaust tips as a component to accentuate the classy, contemporary look of the exhaust. What’s more, aFe Power even included some MIG-welded hangers and some OE style clamps to ensure that installation is easy and leak-free.

The real beauty of this exhaust lies in its ability to sound aggressive without the presence of any drone whatsoever. Thanks to a 2.5” high flow resonator, the MACHForce XP can keep droning down to a minimum (or not at all) while maintaining a sporty and predatory sound output. This feature makes the MACHForce XP an exciting pick for enthusiasts who absolutely hate drones while driving. 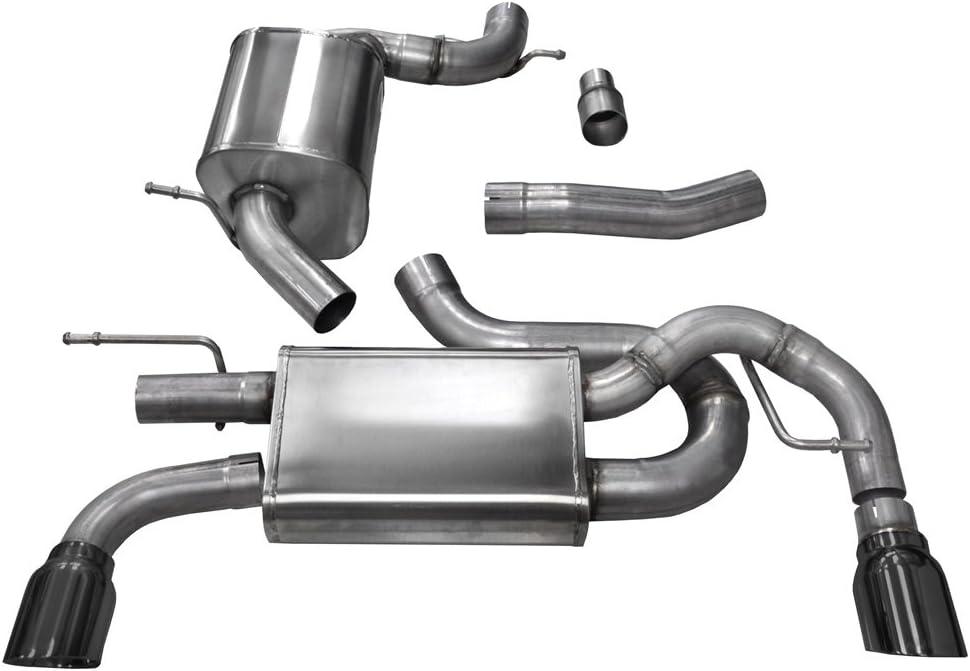 Drone may not be a serious problem, but it can be terribly annoying, especially if you want to chill enjoy a relaxing ride. Corsa Performance understands how satisfying it is to drive without any drone; that’s why they created an MK6 GTI Corsa exhaust for GTI fans like you. Come take a look at the Corsa Performance Touring Sound Level Cat-Back Exhaust System, a drone-free exhaust for people who don’t want any annoying persisting sound while they drive on any RPM range.

The Touring Sound Level Exhaust System sports a moderate exhaust grunt that sounds great while cruising. Its straight-through and non-restrictive design, matched with a unique muffler technology, ensures that you won’t hear any drone at any RPM ranges. This is all thanks to Corsa’s Reflective Sound Cancellation (RSC) Technology. Because of this feature, you can enjoy an aggressive rumble at acceleration, and a drone-free experience while cruising.

The kit comes with a 3.0” intermediate pipe, a tailpipe of the same size, and 4.0” exhaust tips. Corsa made sure that these parts were made out of premium stainless steel mandrel-bent to ensure that exhaust flow was as free-flowing as possible. What’s more, the handcrafted dual exhaust tips add a degree of style and aesthetics to your car’s overall looks. Just look at those polished dual exhaust tips – they look great! 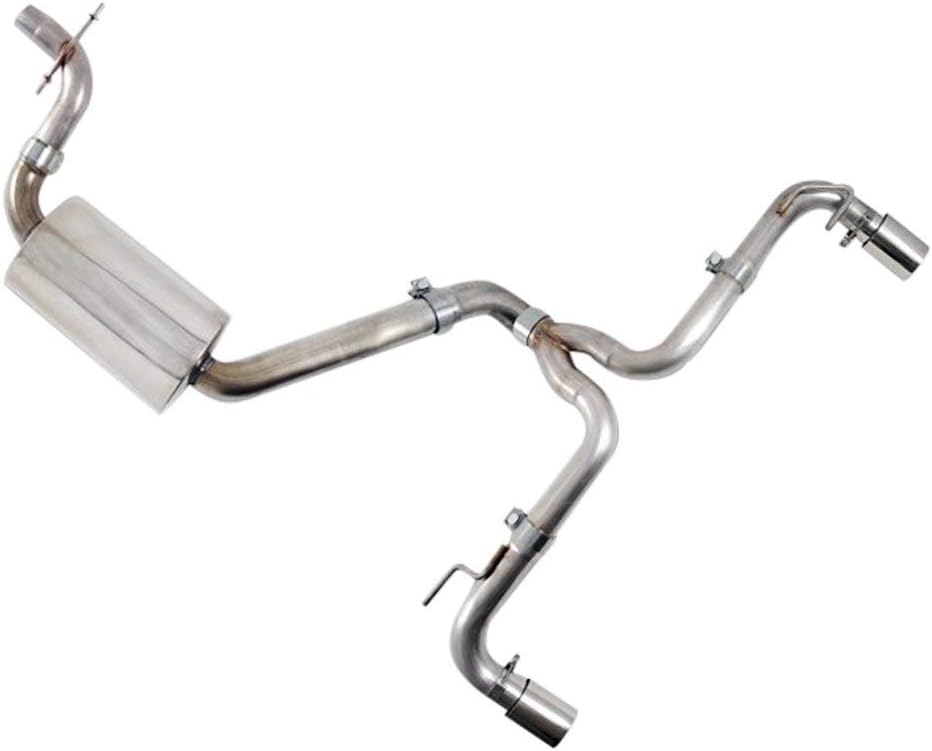 Are you looking for something that can make your car sound sophisticated, refined, and powerful simultaneously? If you are, then this MK6 GTI AWE exhaust is definitely the one for you. AWE Tuning is widely popular due to their exhausts’ “Jekyll and Hyde” personality, remarkable civility while at cruising speeds, and a loud war-cry like wait at wide-open throttle.

The AWE Tuning Cat-Back Performance Exhaust System sports an aggressive exhaust sound output, an ideal choice for people who want to go loud or go home. Crafted from 304 stainless steel, the 2.5” main tubing is enough to efficiently assist the existing exhaust gasses out of the engine.

At the end of this exhaust system lies a pair of diamond black exhaust tips, which looks exceptionally great if you ask us. However, if you don’t fancy those exhaust tips, you can opt for some classic chrome-silver tips instead.

Akrapović may be widely known for their wildly expensive titanium exhausts, but they also have some stainless steel exhausts on their arsenal. For the Volkswagen MK6 GTI they have a slip-on exhaust system made from stainless steel. It’s far lighter, and it can outperform your stock exhaust system. And although the stock exhaust already sounds good, this MK6 GTI Akrapović exhaust can make it much better.

So what does the Akrapović Stainless Steel Slip-On Exhaust System offer you? Let’s start with exhaust sound quality improvement. Akrapović made this homologated exhaust system to produce a distinct deep exhaust grunt that only they can create. You can even crank its sound up by getting their optional link pipe.

Since this slip-on exhaust system is from Akrapović, you can expect it to be much lighter than the stock. Akrapović is an aftermarket auto parts manufacturer bred for competitive racing, so it’s no surprise that they’ve imbued some racing spirit to these variants of MK6 GTI exhausts and made them lighter than stock. 15lbs – that’s the weight you can shred off from your car once you’ve replaced your stock exhaust with this Slip-On exhaust system.

In addition, this Slip-On Exhaust System offers you a performance increase of up to 4hp at 5,440RPM. You can also get the optional titanium or carbon fiber tailpipes that Akrapović offers, just if you don’t fancy the stainless steel ones.

The Volkswagen MK6 GTI community is extensive, and they have various opinions on what they think are the best MK6 GTI exhausts. They’ve got many exhaust picks, but the recurring and perhaps one of the community’s favorites is an exhaust made by Unitronic. It’s another one of those drone-less exhaust systems that sound impressive but not obnoxiously loud. There’s a lot to love about this exhaust; perfect fitment, sound output, the quality of the parts, and more.

The Unitronic Cat-Back Performance Exhaust features a straight-through muffler design that removes any internal restriction and reduces backpressure. Its 3.0” 304 stainless steel pipes are resistant to rust and corrosion and can even outlast the vehicle itself. These pipes are then TIG-welded to ensure they are leakproof, durable, and stand the test of time. Connected to the ends of the pipe are 4.0” mirror-polished slash-cut exhaust tips, which look fantastic when you look at them from the rear.

The best feature of this exhaust system is its drone-free sound quality. While at cruise, you can expect a non-earsplitting rumble that sounds nice without the presence of any drone. This is possible because Unitronic’s Sound Absorption Technology takes unwanted frequency and assures a rich and satisfactory exhaust tone.

For better results, both in performance gains and sound output, we recommend that you fit these MK6 GTI exhausts with an aftermarket downpipe. This add-on can make your car louder and sound even more aggressive because it allows the sound waves to travel seamlessly without collision.