How an Engine Works

The standard internal combustion engine works by taking linear force and turning it into rotational force through a rotating assembly (crankshaft). The cylinder size is measured by width (bore) and height (stroke), and that gives it its overall displacement. The piston moves up and down through a 4-stroke process.

How to Increase Stroke

This makes the piston move down further while keeping its peak height the same as the factory engine. Why do you need to keep the height of the stroke the same as stock? Well, if you didn’t, the piston would force itself the cylinder head, and your engine wouldn’t work at all.

You can also decrease stroke with the opposite method. Decreasing crankshaft throw and increasing connecting rod length will de-stroke an engine, which might be handy if you need your engine to be smaller to fit into certain classes of racing. For example, the Honda B16B is a de-stroked version of the Honda B18C5.

If Torque is Rotational Force, Then What is Horsepower?

This is an excellent question, and it can be confusing if you don’t already understand the difference. Horsepower = (Torque X RPM)/5252. Say you’re applying 100 lb-ft of force on something, and you’re turning it 100 times per minute. You would effectively be making 1.9 horsepower. 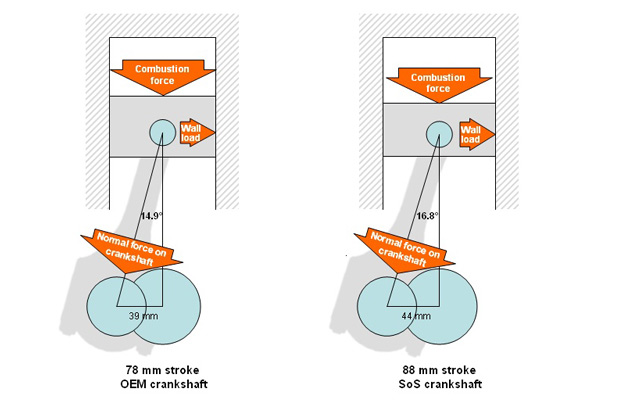 That is the easiest way to explain what rotational force and horsepower are and how they are measured. If you do not quite understand this concept, I recommend watching educational YouTube videos for more information.

A small stroke allows the engine to rev higher, and thus make more horsepower, so why would you want to increase the stroke? Well, horsepower isn’t everything. Increasing the stroke increases the torque an engine can make. Torque is a rotational force, and it propels your car forwards.

The torque rating is what matters when you are just cruising around town. If your vehicle has a tremendous amount of torque, you don’t have to rev it up very high to accelerate quickly. Why is that a good thing? Well, let’s assume you’re on the highway in 5th gear. If your vehicle doesn’t make lots of torque, you will have to downshift to pass the person in front of you, if your vehicle does make a lot of torque than you won’t need to downshift to pass the car in front of you.

For drag racers and street racers, this is great, as it allows them to get out of the hole quicker. For road racers, torque is a little bit less important since they are often high up in the RPMs where the engine makes its peak horsepower.

How Does It Increase Torque?

Well, remember when I was explaining how torque is measured? It’s like taking a lug nut off. Since increasing the stroke is done through increasing the crankshaft throw, adding a breaker bar to your lug nut wrench would achieve the same effect. The combustion inside the cylinder has more leverage on the crankshaft, thus creating more rotational force, and creating more torque.

Words can be difficult to understand, so I urge you to watch the video below to better understand how a stroker motor works.

Small block Ford engines that came in Fox Body Mustangs are typically stroked from 302ci to 331ci or 347ci. The larger 351W that can be swapped in can be stroked to all the way up to a 408ci or larger depending on the cylinder block. The 4.6L modular Ford engines are stroked to 5.0L, 5.2L, or 5.4L.

Small block Chevy engines are typically stroked from 350ci to 383ci. Different Chevy blocks are stroked to different sizes; some are even de-stroked. Back in the day racers use to stroke 400ci engines down to 377ci to allow for high revs and more power. LS1 engines can be stroked to 383ci, and larger LS engines like the LS3 can be stroked up to 427ci.

To summarize, just remember that a stroker motor is a standard engine, but with an increased stroke in the cylinder. This increases total displacement resulting in more torque and more horsepower. These motors are often used in muscle cars, as they give it that muscle feeling. If you don’t have to rev your car out to beat somebody else, it feels pretty awesome. Of course, stroking or de-stroking an engine isn’t just limited to muscle cars. It is very common in the tuner world.