Think of an early 2000s Buick, what comes to mind? Grandpa car, ugly, slow? How about performance car with all the luxuries you’d ever need. That’s right, the 4th generation Buick Regal GS, produced from 1997 – 2004, with its 3800 Series ll 3.8 Liter V6 with a supercharger strapped to it.

Heres what makes it the ultimate sleeper sedan:

The Buick Regal is also a pretty boring looking car, it blends in with normal cars. Nobody would look at one and think “That could easily be a 12 second car”. That’s what’s so great about the Regal GS, it looks identical to the standard Regal which is a grandpa mobile.

The only exterior difference between the Regal GS and a standard Regal is the rear wing, so unless you look for the wing, you wouldn’t be able to tell the difference from the outside.

Buick rated the Regal GS at 240 horsepower and 280 ft-lbs of torque out of the factory. That is pretty good considering the Mustang and Camaro of the time were making nearly the same amount of power as the Regal GS.

This was enough to propel the Regal GS from 0 – 60 mph in an impressive 6.7 seconds. The 1/4 mile is run in a fairly impressive 14.9 seconds. By todays standards the Regal GS is pretty slow, but back when it was new those were very respectable performance numbers. 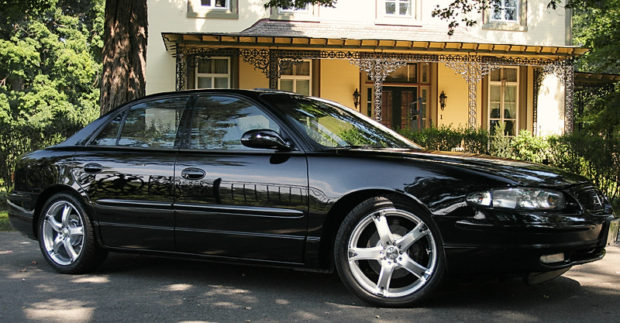 What’s funny is that in 1997 when the Regal GS was released, it was advertised as the “car for the supercharged family”. That’s a pretty funny and good marketing logo. It’s also pretty accurate, as the Regal is a family sedan, and the GS is for the go fast family.

A modified Regal GS will pretty easily run 12-13 second 1/4 mile, but that’s not the best part. Since its supercharged, and more specifically it’s a screw blower, the power comes on instantaneously. The power also comes on very low in the RPM range, resulting in a huge amount of torque which makes it great for driving around town and in traffic.

Common upgrades for the Regal GS include a smaller supercharger pulley to increase boost, intake, exhaust, a good tune, and various Pontiac Grand Prix GTP parts that are direct bolt in. Now your grandpa sedan is faster than many “performance” cars. You can expect 12-13 second 1/4 mile times out of a modded Buick Regal GS, while still maintaining a full leather interior, smooth ride, and power everything.

The Buick Regal GS is also cheap to buy, and insure since it’s a 90s GM car. It’s also relatively easy to work on, and pretty reliable, parts are abundant since the 3800 Series II came in so many different GM cars. A Regal GS can be purchased from $3k up to $6k for a clean example.

Luckily the very popular medications scubas the smaller pulley on the blower are very cheap. Just like the Terminator Cobra, a small pulley and new belt is only a couple hundred dollars. In the case of the Regal GS, this cheap modification will raise horsepower from 240 bhp to 280-300 bhp.

The Regal GS probably isn’t going to win any road races, car show trophies, or the hearts of women. The only thing that the Regal GS is going to win, are straight line races against Mustangs, Camaros, and many other “performance” cars.