If you’ve ever looked into Mercedes-Benz, then you’d know that there are a few different models. Mercedes-Benz uses a class structuring system similar to BMW, just with letters to identify the “series” instead of numbers. So what are these “series”? Mercedes-Benz has quite a few series, but the most common are the C-Class, E-Class, and S-Class. Each different in its own respects. How are they different and which one suits you the best? Let’s dive in and compare C-Class vs E-Class.

Mercedes-Benz introduced the C-Class in 1993 as a replacement to the much-loved 190E. The 190E was the smallest car available through Mercedes at the time, and it was tremendously successful. After the success of the 190E, they decided to launch a new series of cars, that would be compact like the 190E. This is how the C-Class was born. The “C” in C-Class rather obviously stands for “Compact”.

It was essentially a more compact version of the loved E-Class, which had been around for a long period of time. The C-Class was also much more affordable to the average consumer. To this day the C-Class is one of Mercedes’ best-selling cars.

Before 1993 there was no E-Class; E just meant that model was fuel injected. After all of their models had become fuel injected, they decided to restructure their model naming system. This is why the C-Class was born at the same time. The E-Class was designed to be Mercedes’ “in-between model”. It’s not as small as the C-Class, and it’s not as giant as the S-Class. The “E” in E-Class stood for “Executive”.

RELATED: 4 Reasons The LS400 is The Ultimate Luxury Car

Today in 2016 the E-Class is Mercedes’ best-selling model. It offers something for everybody; a fuel efficient diesel, a comfortable luxury car, and a ridiculous twin turbo AMG. It’s the jack of all trades.

One of the drawbacks of the C-Class is its interior. Don’t get me wrong, it’s way nicer than anything I’ve ever driven. Even my mother’s ML350 isn’t as nice as a brand new C-Class. But, the E-Class is even nicer. They both features ton of luxury things like heated steering wheel, and heated seats. 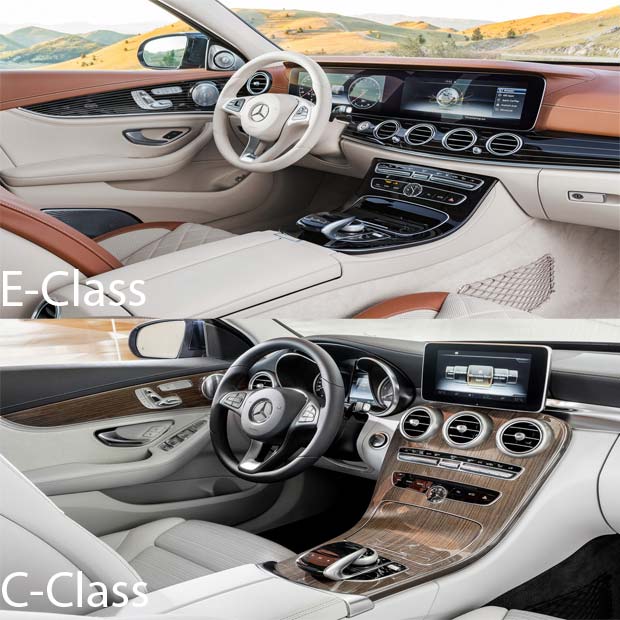 The new E-Class features something way too cool to top. There are no gauges. There is one large horizontal display. It’s both the gauge cluster, and the info/entertainment system. The E-Class also features a better audio system, nicer leathers, and various other features that aren’t available in the C-Class.

Both are incredibly luxurious, but the E-Class is obviously nicer. You get what you pay for after all.

Like I said earlier, the C-Class was based on the 190E. The C-Class is designed to be smaller than an E-Class or S-Class. This helps keep cost down, and the average consumer doesn’t need a sedan as large as the S-Class. The larger size of the E-Class is used mostly for increasing rear legroom.  This is important if you frequently have adults in the rear of your car, and want them to be comfortable. 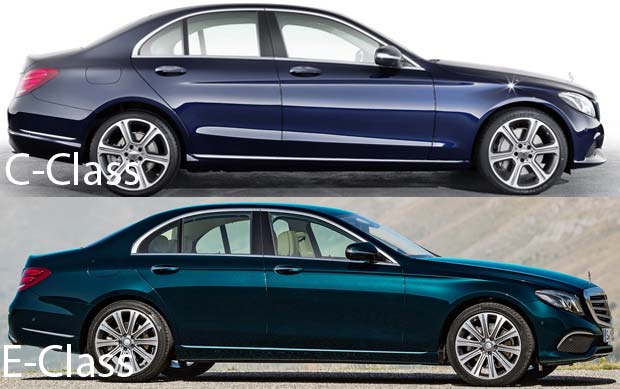 As you can see from the photo above, the E-Class has much larger rear doors. From the front doors forwards, they’re basically the same in size. The E-Class also has a larger trunk, which is helpful for fitting your golfs bags, because that’s what E-Class owners do. 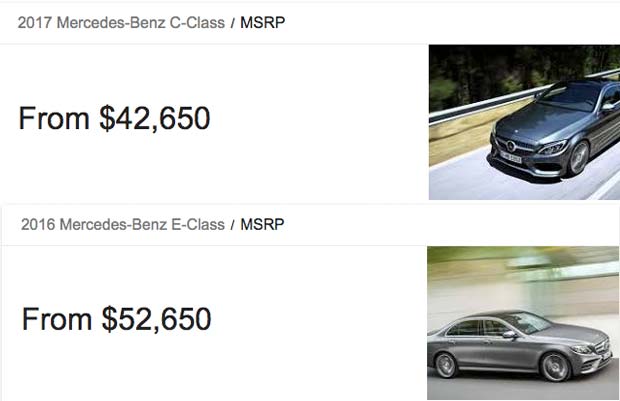 RELATED: 3 Reasons Why The Infiniti Q45 is The Best Luxury Car Ever

That’s right, there is a $10k difference between these two. That’s quite a lot, but you are getting a lot for that money. For $10k you get a larger trunk, more rear leg room, nicer interior, and more features. Keep in mind that these prices reflect the base models. You’ll likely add $10k+ in options.

Both the C-Class and the E-Class come with a host of available engines. For 2017 the E-Class only has one engine, so we’ll be looking at the 2016 models to make it fair.

Which one is better really depends on your pockets. It’s pretty obvious that the E-Class is better in nearly every single way. The point of the E-Class and S-Class is to offer more features than its lower model. Most of us will end up picking the C-Class strictly for financial reasons. If you have the money, get an E-Class.

About Bryce Cleveland 276 Articles
Bryce founded Dust Runners Automotive Journal in 2014 as a way to write about the cars he found interesting. He sold is 2015 Fiesta ST and now commutes on a 2018 Yamaha MT09.